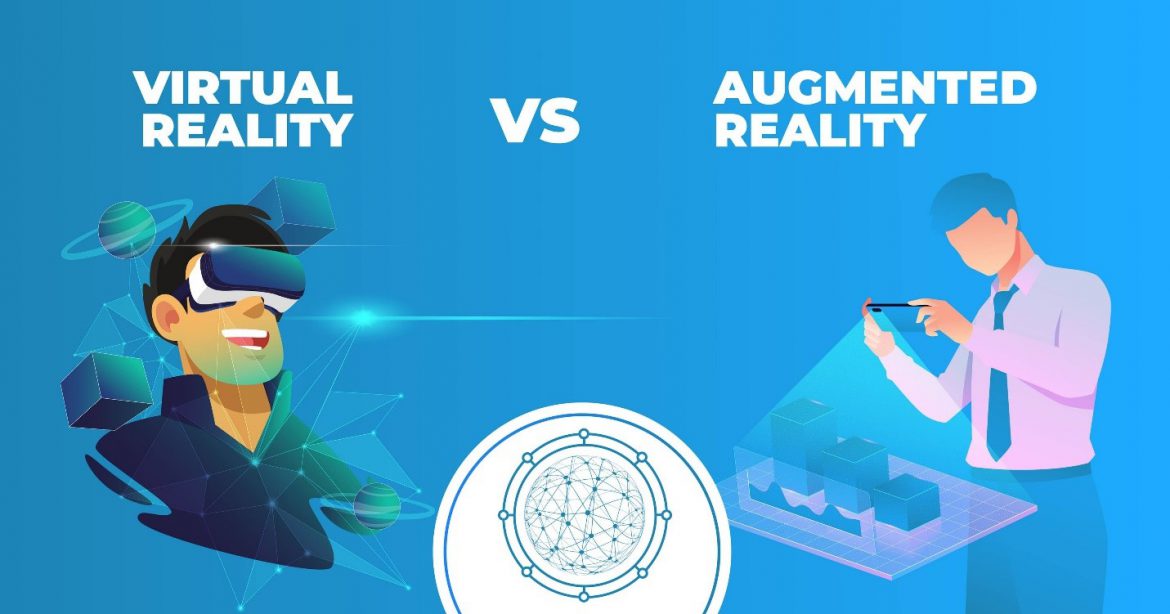 The debate of Virtual Reality VS Augmented Reality has erupted due to the latest advancements in technology. As the technologies develop, they tend to bleed over one another, leading people to believe that the terms Virtual reality and Augmented Reality carry the same meaning. They are two very different concepts with several characteristics that distinguish one from another. The only similarity that they might have is that both aim to alter our perception of the real world, taking us to an entirely different experience with both the taste of the real and imaginary world.

Virtual reality is technology solely focused on creating a simulated environment, blinding the user to the real world and giving them a seamless imaginary experience through closed visors or goggles. Samsung Gear VR, The Oculus Rift, and Google Cardboard are some of the highly recognized names in Virtual Reality.

What is the difference between Virtual Reality VS Augmented Reality?

Virtual Reality and Augmented Reality are two different things aiming to achieve different goals in a distinguishing manner. Despite the look and feel of the devices being reasonably similar, the technology behind them is contrasting. Virtual reality will give you the experience of being in a simulated situation and interacting with it. In contrast, at the same time, Augmented Reality will use the physical world around you to create an innovative yet interactive environment. While the differences in Virtual Reality VS Augmented Reality go on, it can be said that while VR is said to be more immersive, AR can provide the user with more freedom and the possibility to have experimented in several ways.

To get a clear idea about the differences, we first need to look at the in-depth detail of both the world’s first.

VR makes use of computer technology to create a simulated environment. The computer acts as a gatekeeper to the artificially constructed world by simulating all the senses such as vision, hearing, touch, and even smell. The technology can easily be recognized from a prominent component that is a Head-Mounted Display (HMD). The HMD immerses the user within the simulated environment. As the head of the user turns, the graphics react accordingly with a flow to make the user believe that they’re a part of the imaginary world.

With multiple hardware being developed and several software options, the future of wearable devices is unfolding but are yet to be called a finished product. Concepts such as Oculus Quest, PlayStation CR, and HTC Vive Pro Eye lead the way; however, Google, Samsung, and Apple are constantly putting in efforts to introduce new immersion and usability levels to their devices, making use of VR.

Being very similar to VR, Augmented reality sparks the interest of leading mobile and other companies aiming to provide its users with enhanced features while using the world around them. One of the primary examples of AR is the well-known game called “Pokémon Go.” The game made use of sensors and algorithms to determine the position and orientation of the camera. Then the 3D graphics are rendered accordingly as the world appears from the viewpoint of a camera. The graphics are superimposed on the user’s view of the real world.

Which is better Virtual Reality or Augmented Reality?

The battle of Virtual Reality VS Augmented Reality might go on forever as both technologies have significantly developed over time, from being integrated into complex industrial tasks to daily activities. Each of them has its pros and cons solely dependent on the situation at hand. In some fields, Virtual Reality exceeds the usability ratio compared to augmented reality and vice versa. Giving one the priority over the other in general is not possible as both carry a significant amount of importance in different sectors.

What is augmented reality in simple words?

Once you get into complexities, understanding the purpose of Augmented Reality can be a challenging task. AR is the real-time use of information in audio, text, graphics, and other virtual enhancements integrated with real-world objects.

What are the examples of augmented reality?

As we go into details and practical usage of both the technology, the debate of Virtual Reality VS augmented reality gets even more enjoyable. Virtual reality’s practical application is pretty straightforward as it is immensely used in the world of gaming and prototyping purposes. At the same time, augmented reality is continually being experimented around and put to several uses. Following are some of the daily life examples where AR has had a massive influence:

Conveying that augmented Reality and Virtual Reality are intended to work separately can be stated as wrong. Most of the time, both technologies blend to generate an improved and engaging experience for the user. These technologies can be applied to education, entertainment, e-commerce, advertising, and many other fields to take advantage of them. Experimenting with the projects before physically implementing them can save numerous resources and cut down lots of high costs such as transportation and other services. VR and AR both are under work, and hopefully soon, we would all see a world that is fully immersed with the experiences coming from the duo.

Did you find interested this article about Virtual Reality VS Augmented Reality?

If you liked our article about Virtual Reality VS Augmented Reality, you may find interesting the following articles:

Discover What is High-tech? 2021 Updated

To discover the latest news in the high-tech industry, follow us on Linkedin.