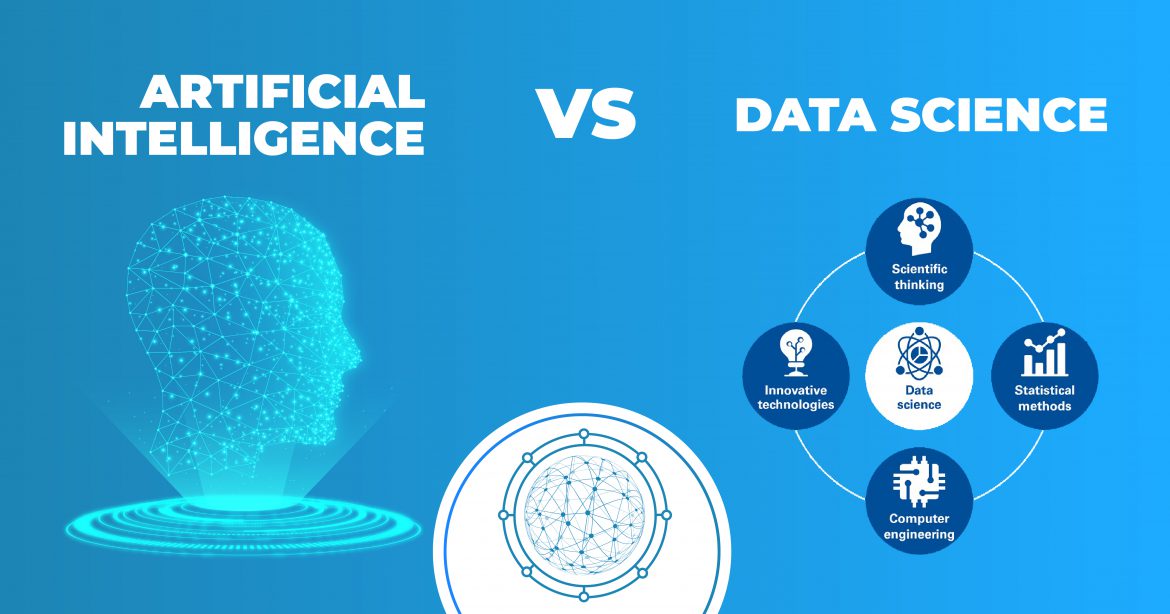 Words like data science and artificial intelligence are frequently used interchangeably in the current digital world, but they are not the same term. While both are computer science divisions, there are several distinctions between the two. You may be looking at various aspects of data analysis to see Data Science VS Artificial Intelligence. All information is included in this article to explore the distinctions between artificial intelligence and data science.

What is Data Science

Data science is a broad field of study related to data structures and processes, aimed at preserving data sets and deriving value out of them. In Data Science, a variety of methods, applications, concepts, and algorithms are used to make sense of random data clusters. Since almost all kinds of organizations produce exponential quantities of data across the globe today, it is difficult to track and store this information. To control the ever-growing data collection, data science focuses on data modeling and data warehousing. To direct business processes and achieve organizational objectives, knowledge extracted by data science applications is used.

What is Artificial Intelligence

Artificial Intelligence (AI) is a broad branch of computer science that deals with the development of intelligent devices capable of performing tasks that typically involve human intelligence. AI is an interdisciplinary science with diverse approaches, but in almost every area of the software industry, advances in machine learning and deep learning are creating a paradigm shift. AI also encourages machines to modify their “knowledge” based on new inputs that were not part of the data used to train these machines.

Another way to describe artificial intelligence is that it is a set of mathematical algorithms that make computers understand the relationships between various types and pieces of data so that it can be used to draw conclusions or make decisions that can be very highly accurate.

Here are the differences and a closer look at Data Science VS Artificial intelligence in detail:

Is Data Science a Subset of Artificial Intelligence?

Why is Data Important in AI?

A lot of data science vs artificial intelligence is yet to be discussed. Data Science has already begun to make a significant difference in the market. The data that can be used for visualization and analysis is transformed by Data Science.

New products are developed with the aid of Artificial Intelligence, which is better than ever, and it also brings control by automatically doing several things. Data is evaluated based on careful business decisions, with the aid of Data Science, which gives businesses many advantages.

Several Artificial Intelligence-based businesses are offering pure AI work, such as NLP Scientist, Machine Learning Engineer, and Deep Learning Scientist. The Data Science algorithms implemented in languages such as Python and R are used to perform various operations on data. Today’s main decisions are made based on data processed by data scientists. Thus, in every organization, data science must play a critical role. Hope you got the idea of data science vs artificial intelligence and how they are related.

Other Comparsions about Artificial Intelligence.

Keep updated by our Social Networks:

Why Big Data Is Important? Update 2022