5+ Artificial Intelligence Pros And Cons To Help You Understand It Better! 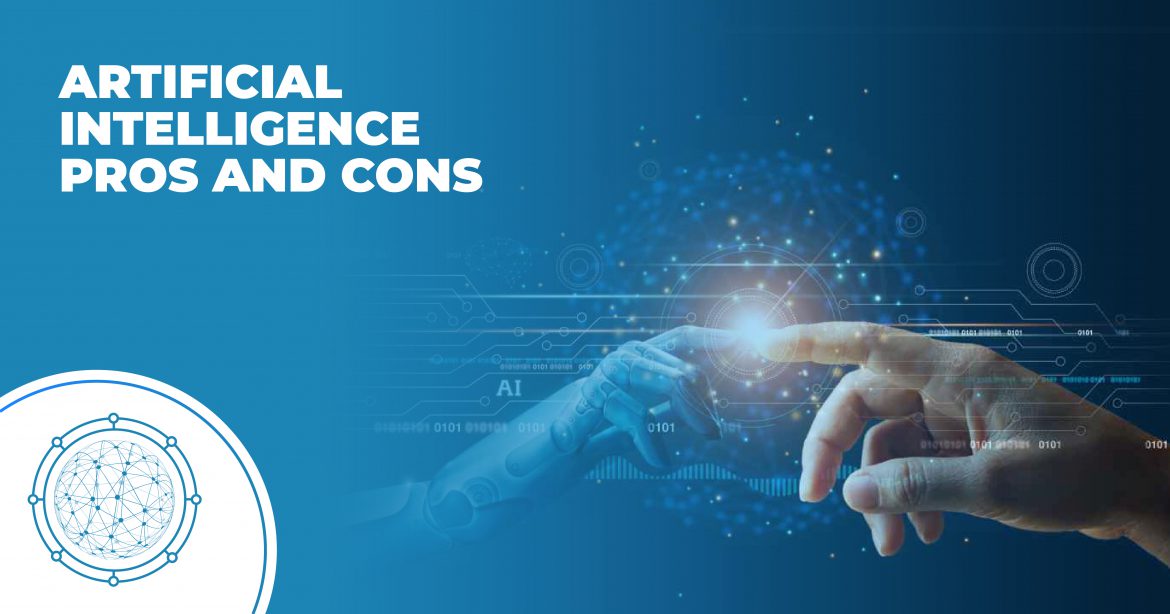 5+ Artificial Intelligence Pros And Cons To Help You Understand It Better!

The entire perspective of artificial intelligence has molded with the passage of time. Looking back at the history books, in the 1950s the master of this field, Minsky, and McCarthy described Artificial intelligence as any task that is being performed by a machine that would have needed human intelligence to execute efficiently. However, as broad and clear this definition is, it creates a lot of misconceptions as to whether the system at the debate is truly AI or not.

A modern definition of what it means to create an intelligent system has gotten a tiny bit more specific. It is now said that intelligence is not just bound to perform tasks through a certain set of rules that have been predefined, however, it is tied to a system’s ability to perform tasks, improvise and adapt according to the new environment. It must generalize its knowledge and apply it to cope efficiently with unfamiliar scenarios. As much of a blessing, it is said to be, it’s still bound by Artificial intelligence pros and cons.

The excess of anything can ring major alarm bells, and so is the case with Artificial Intelligence. AI being used today is narrow AI (Weak AI) meaning it can only be enabled to carry out narrow tasks. The long-term goal of researchers is to create general AI (Strong AI) which can be used to perform highly complicated tasks even exceeding human intelligence levels. It is unlikely that these types of systems would be able to replicate human emotions, and that there is no reason to expect that these artificially intelligent systems would become intentionally useful or malevolent. The following is a more in-depth look at Artificial intelligence pros and cons.

What are the negatives of Artificial Intelligence?

Looking at the general drawbacks of any self-driven technology, you commonly see the issue of high cost arise along with the loss of the human workforce that was previously needed. It’s a pretty straightforward fact that technology as complicated as AI is bound to have relatively higher installation and maintenance costs.

People don’t possess the skills that are in demand thus leading to a higher rate of unemployment. This vast gap between supply and demand along with the capital-intensive technologies overtaking human-intensive requirements, if there is not a significant increase in human skill, it would not be a shock to see them being replaced by high-tech machines.

Overall looking at the major artificial intelligence pros and cons here’s how AI can become a potential risk:

Autonomous weapons are empowered by artificial intelligence specifically programmed to kill. If put in the hands of the wrong individual, it can lead to a devastating amount of casualties. This AI arms race would evidently lead to AI war also resulting in a huge loss of human lives. For these weapons to become extremely powerful, they are designed not to be dismantled easily in case the enemy strikes. In any such case, humans could plausibly lose control of the system. As of now the risk of it happening is limited due to humans being restricted to Narrow AI, however, with the levels of AI intelligence growing it can seemingly become a major threat to society.

This is a possibility when human technicians fail to properly align AI goals with the actual requirements. In order for it to complete a certain task, it may develop specific ways that would definitely achieve the goal in the end, but the methods used can be harmful in one way or another. Simply asking your car to reach a certain location within a limited time frame might trigger those unneeded alterations and it may cause havoc on the road just to complete what you literally asked for.

No improvement with experience:

Artificial intelligent systems are bound to follow a set of rules without being able to cope with the dynamic environment. They can perform the same function again and again only until a different command is given to them.

What are the advantages of Artificial Intelligence?

There is no doubt in the fact that technology such as Artificial intelligence has become an essential part of the development of human growth. Humans, with time, have become dependent on this technology to perform various tasks with absolutely no chances of errors. This has reduced the requirement for human power-saving immensely on the costs and the budget spent to fix the human-made errors.

When looking at Artificial intelligence pros and cons, the positives definitely outnumber the negatives. Here are some of the major advantages that AI holds:

Artificial intelligence can be used to perform complex tasks using machines in the case of physical extractions. The extra hard work that previously had to be put in by the human workforce can now easily be compensated by AI machines working tirelessly and efficiently yielding a much better output.

AI machines make decisions based on previously inserted data records. With the use of algorithms, the occurrence of errors is greatly reduced. Thus, it’s quite an achievement in terms of solving complex problems in which humans are bound to make mistakes.

Logic resides above all. Highly advanced AI systems make rational decisions, unlike humans where emotions play a major role. When the thought process is being done artificially, there are fewer stakes as no distractions occur. The mood doesn’t hamper the efficiency, meaning they’d be productive at all times.

Is AI beneficial or not?

The idea is that AI is a technology that has potential beyond human imagination. As we’ve just looked at the general artificial intelligence pros and cons, it’s safe to say that every piece of technology has a fair share of both positivity and negativity. It depends on the use of the technology that Portrays whether it’s beneficial or not. AI has progressed miraculously over the past few decades and has brought major changes in almost all the significant domains of life.

The powerful influence has encapsulated many domains including agriculture, marketing, education designing, and many more. Artificial intelligence seems to be a groundbreaking technology in most ways but it does have some scary aspects to it. Just like any other thing of the universe, there exist artificial intelligence pros and cons too.

You may also be interested in Best AI Startups.

The rise of Artificial Intelligence

Discover The Rise of Artificial Intelligence 2022

Discover What is High-tech? 2022 Updated