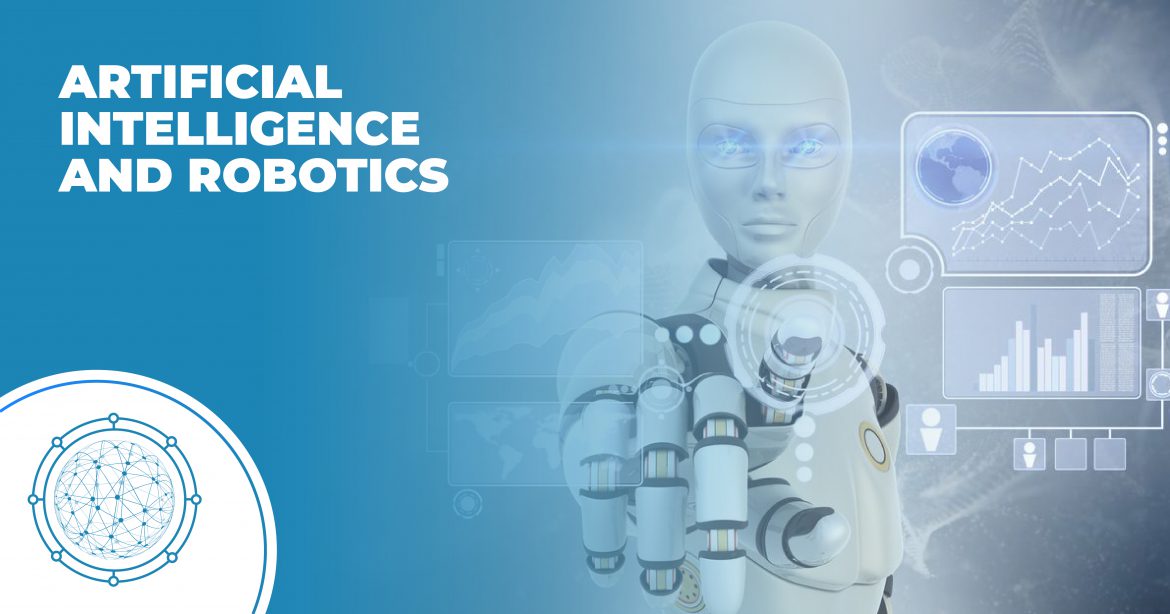 Artificial Intelligence and Robotics are a powerful combination for automating tasks. With the emergence of new technologies, AI has become more of a common presence in robotic solutions, introducing higher efficiency and learning capabilities previously unknown in the previous rigid applications.

Robotics is specifically a branch of technology that deals with physical robots. They carry out a series of actions autonomously or semi-autonomously as they are programmed. There has been a significant debate on what “Robot” actually means, as some believe that robots must be able to think and make decisions according to the situation at hand. In contrast, some have the idea of robots only performing pre-programmed tasks. However, there is no standard definition of “robot thinking.”

On the other hand, Artificial intelligence is a branch of computer science that involves developing systems in a specific way that aims to complete tasks that would otherwise require human intelligence. AI algorithms are designed in a way that they can tackle learning, perception, and logical reasoning.

What is the difference between Artificial Intelligence and Robotics

The first thing that needs to be clarified is that Artificial intelligence and robotics are not the same. They can be merged to form an entity, but looking at them separately, they can be seen as two entirely separate fields.

The following table can give you an idea of some of the primary differences between Artificial intelligence and Robotics:

What is the role of robotics in Artificial intelligence

When specifically talking about artificial intelligence and robotics, AI robots have created a bridge between both technologies. Previously when AI was not integrated within the robotic world, robots could only perform a specific set of repetitive tasks and movements that surely did not require artificial intelligence.

When combined with advanced vision systems, Artificial intelligence can assist with real-time course correction, particularly beneficial in Aerospace. AI also allows robots to learn new ways to perform a task, depending on the severity of the situation.

For the companies to save costs on manual packing, AI efficiently lowers the costs while also performing the tasks relatively quickly.

AI allows robots to interact more humanly, meaning that they can be a great tool to provide customer care services. These robots tend to learn along the way, improving the level of services with time.

Is Robot an example of artificial intelligence?

The robotic industry it is safe to say that has a lot to do with Artificial intelligence, but AI should not always be stated when mentioning a Robot. The reason for this is due to the existence of non-intelligent robots. Programming a robot is simply pick up objects or placing them in a certain position. In other words, robots doing repetitive tasks without altering the ways is not considered an artificially intelligent Robot.

With the boost in technology and increased need for Robot powered human assistance, AI algorithms are necessary if robots are to perform more complex tasks. With the recent integration of AI, Robots have become intelligent enough for them to think critically. A drone can use Autonomous navigation to return back in case it runs out of battery; a self-driving car might use a certain set of AI algorithms to timely detect and avoid any potential roadside hazard; a self-driven vacuum cleaner can identify when the cleaning is complete.

If we look at the overall image of Artificial intelligence and Robotics, the have been interlinked to obtain the maximum potential of both technologies. There’s no separating them; however, they must not be interchanged as they exist as a separate entity in itself.

What would make a Robot Intelligent?

Most robots are pre-programmed to work according to the given set of basic rules by a human operator. As time has progressed, we’ve seen a boost in the technology world, enabling robots to perform tasks that were previously unimaginable by the human brain. These robots use a range of sensors attached to them along with potent onboard processors, which allows them to replicate human senses to perfection. Alongside the assistance that the sensors and other hardware provide these robots with, here’s where Artificial intelligence’s role comes into play.

With the integration of AI, it enables the robots to have the ability to learn. Learning robots recognize if a certain action would achieve the desired results and in what manner. The robot stores this piece of information that attempts the same course of actions when faced with a similar issue in the future.

Other comparisons about Artificial Intelligence.

you may be interested in: Data Science VS Artificial Intelligence: 10+ Most Important Differences

Discover What is High-tech? 2021 Updated

What Nanotechnology Is Used For? 12 Most Important...